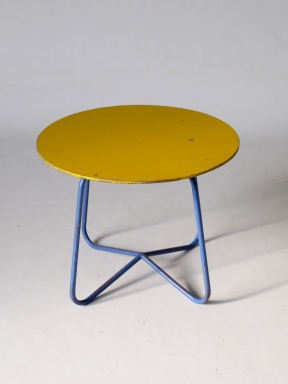 Between 1925 and 1955 influenced by the Dutch Modernist De Stijl painters and designers Ko Verzuu designed many children’s toys. His designs were inextricably bound up with innovations in art, health care and pedagogy in the first half of the 20th century. In 1920, the sanatorium Berg en Bosch was founded in the sanctuary on the outskirts of Apeldoorn. This sanatorium offered rest and care to tuberculosis patients.

Once patients had recovered from their illness, returning to regular working life often proved to be difficult. In order to prepare patients better for their reintegration, the sanatorium developed a modern treatment: occupational therapy.

One of the ways this took shape was in the production of wooden toys. These toys were given the name ADO; an abbreviation that initially stood for Arbeid door Onvolwaardigen (Labour by the Deficient), but was wisely changed to Apart Doelmatig Onverwoestbaar (Special Functional Indestructible) in 1962.

Occasionally ADO made actual ‘real sized’ furniture – This is a very rare small table made by ADO during the 1930s. All original and in great condition…although the top shows signs of age as would be expected.