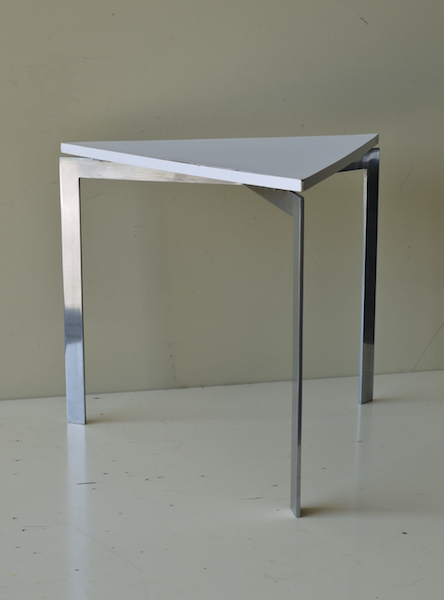 Pair of triangular side tables, 1950s

chromed steel and formica board.

The Dutch architect Wim Den Boon alongside Hein Stolle and Pierre Kleykamp formed the ‘Group&’ in the period shortly after WWII as part of the Dutch ‘Goed Wonen’ (Good living) movement. They focused on designing purist interior furniture and design that fitted in seamlessly with the functionalist designs of the thirties.

By the 1950s Den Boon broke with ‘Group &’ and established himself as an independent furniture designer in The Hague. From that time and throughout the 60s he was responsible for many interiors and renovation projects, particularly in The Hague. These two tables (one shown) were designed as part of the interiors of one of those projects – The tables can be seen within the complete interior of a house in the images of Peter Voge’s biography of Den Boon.

As seen, the design of these tables was ahead of its time – There are visible influences of Rietveld and De Stijl or even the Scandinavian designs of Kjaerholm. At his best Den Boon designed some of the most futuristic interiors during the 1950s. His furniture is rare to find and most of it can only be experienced through photographic documentation.